Consumers must pay attention to the effective promotion period of the products when purchasing sanitary products. Otherwise, it will lead to a series of problems that ultimately affect their emotions and expenses. What is the matter with this? Let's look at the problems caused by the most common mistakes consumers make when purchasing.

First, I found the problem when I was preparing for payment after the purchase. Miss Liu went to the checkout counter after picking up the bidet and toilet in a ceramic bathroom sales shop. When she paid, she heard that the cashier had reported the total price. Note, then enter the bank card password immediately. After returning home, she took out the print receipt and looked at the above number. It seems that the above figure is not correct. Then she found out that the store had overcharged her 129 yuan, so she was very angry. She went to the store early the next morning. Clerk theory.

As a result, the clerk said that the product was indeed discounted, but the discount time limit was clearly marked, and Miss Liuâ€™s purchase time exceeded the discount period, so it can only be purchased at the original price. However, Miss Liu said why the preferential period has passed and the preferential price is also marked next to it. The person in charge of the store said that it may be that the clerk neglected to forget to withdraw the brand, because it was only one or two days before the end of the preferential period. Ms. Liu said that the seller does have the suspicion of misleading the consumer, otherwise why would she buy this product? But the seller said that it must not be returned, because all the procedures have been completed, and at most, Miss Liu is attached. The item apologizes. Miss Liu also had to accept the seller's gifts, but she still feels that the seller is inevitably suspected of deliberately encountering consumers.

Second, after seeing the discounted price of the bathroom products at that time, the consumer only had a telephone store to let them deliver after a day or two. As a result, the price was found to be the way out before the cash on delivery. As a result, the refusal of payment caused a stalemate. Later, the coordination work was carried out with the intervention of relevant departments. It was found that the preferential date had passed, so consumers could only order at the current price, but consumers said that they did not order each other when they ordered. Telling yourself that the product's promotion period has passed, this is equivalent to not telling the customer about the right to know, because he has indicated the products he saw during the promotion period, and now wants to order. However, because there is no telephone record, it is difficult to verify, and finally the consumer can only accept the current price. Therefore, consumers must pay attention to the preferential time when purchasing products, otherwise it may cause the possibility of taking excessive expenses. Â

Rotary Evaporator is an indispensable instrument for the process of evaporation, concentration, crystallization, drying, separation and solvent recovery in the scientific research and production process of the pharmaceutical, chemical and biological products industry.

It is generally combined with the vacuum pump, chiller and other instruments.

The rotary evaporator is developed by constant temperature heating and thin film evaporation under vacuum negative pressure condition. The rotating evaporator rotates the glass rotating bottle at a constant speed with stepless speed regulation, the material forms a large area uniform film in the bottle wall, and then the rotating bottle is evenly heated by the intelligent constant temperature water bath. The high speed evaporation is made under the vacuum condition. The solvent vapour is cooled by the high efficiency glass condenser and recycled to the collecting bottle. The rotary evaporator works in the vacuum condition, and the high temperature and high boron silicon glass and polytetrafluoroethylene are used in the contact part of the material. It is especially suitable for the concentration and purification of the biologics which are easily decomposed at high temperature.

The company supports customized rotary evaporators, such as explosion-proof, voltage and so on.

The rotary evaporator is divided into manual lifting and automatic lifting. Users can choose according to the situation. 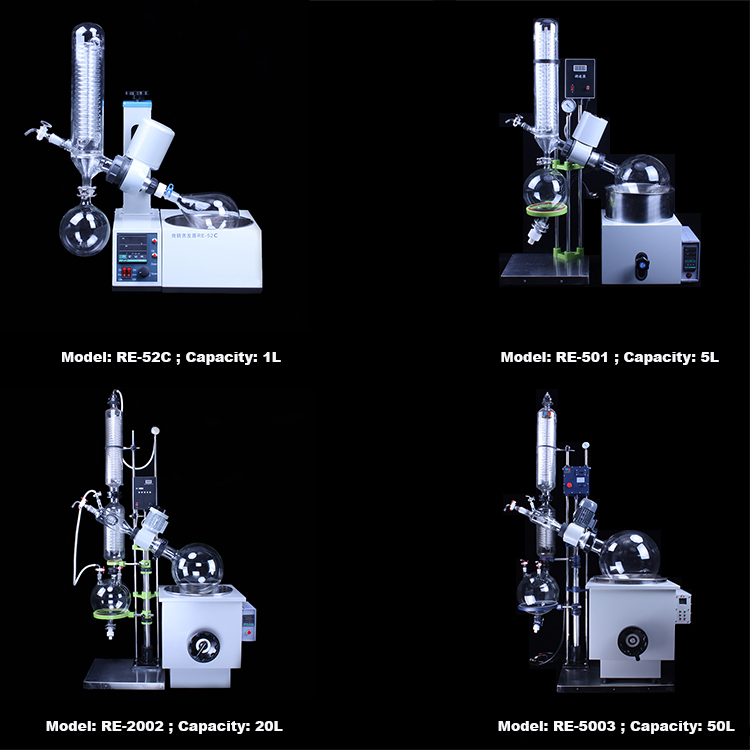 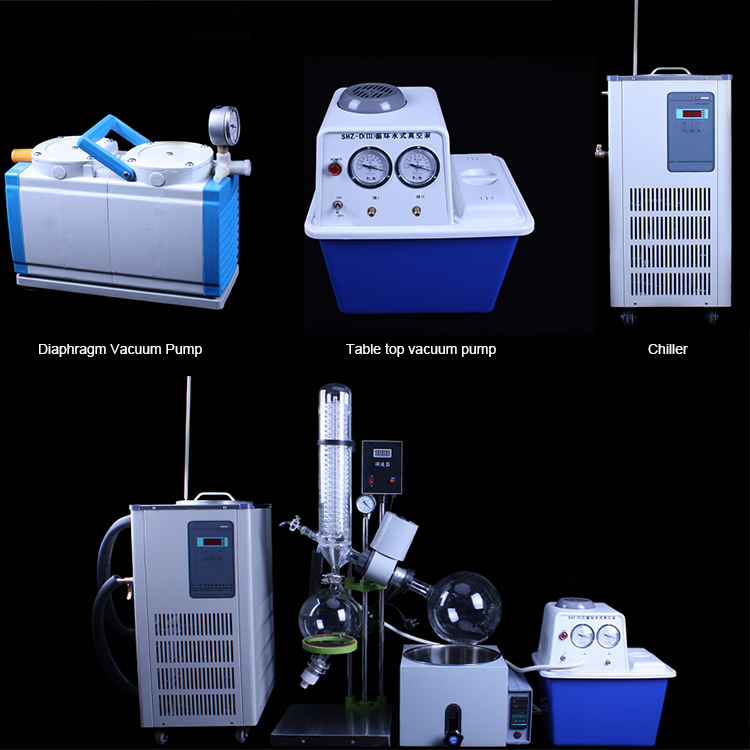